• Born on 11 of May of 1886 in Madrid, where he studied the degree in Mining Engineer . After finishing his studies he was pensioned to travel and to visit several foreign centers. Later, he entered in the Geographic and Cadastral Institute and become Director of the Geologic and Mining Institute of Spain. During this stage he wrote Geophysical Methods of Prospection (Métodos Geofísicos de Prospección), that was awarded with Extraordinary Prize and Gold medal by the Real Academia de Ciencias Exactas Físicas y Naturales, where he was admitted as a Member in 1935. At Consejo Superior de Investigaciones Científicas he also acted as first Vice-president being the first Director of the Instituto Nacional de Geofísica, an institute inside of the Consejo Superior de Investigaciones Científicas (CSIC).

J. García-Siñeriz can be considered, therefore, as one of the maximum figures in the corp of Mining Engineers, having developed an intense professional work, mainly in applied Geophysics. He died in Madrid on 28 of January of 1974. After his death the founder era in Applied Geophysics in Spain is finished. 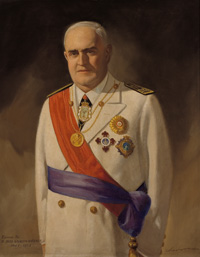